Frank O’Hara, My Father, and Me 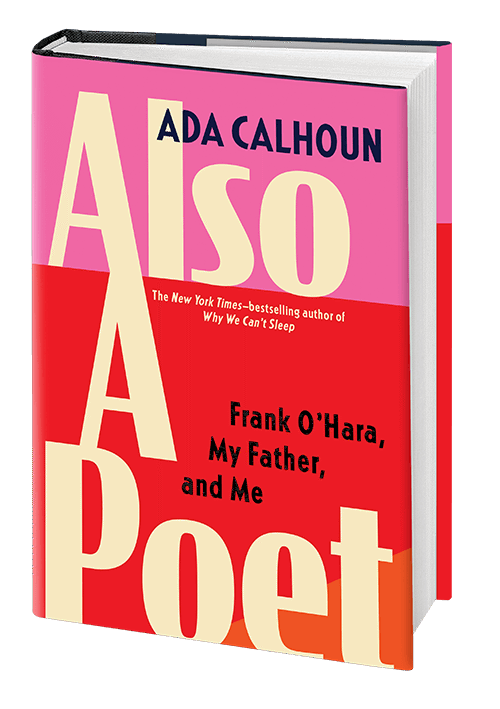 A staggering memoir from New York Times bestselling author Ada Calhoun tracing her fraught relationship with her father and their shared obsession with a great poet.

When Ada Calhoun stumbled upon old cassette tapes of interviews her father, celebrated art critic Peter Schjeldahl, had conducted for his never-completed biography of poet Frank O’Hara, she set out to finish the book her father had started forty years earlier.

As a lifelong O’Hara fan who grew up amid his bohemian cohort in the East Village, Calhoun thought the project would be easy, even fun, but the deeper she dove, the more she had to face not just O’Hara’s past, but also her father’s, and her own.

The result is a groundbreaking and kaleidoscopic memoir that weaves compelling literary history with a moving, honest, and tender story of a complicated father-daughter bond. Also a Poet explores what happens when we want to do better than our parents, yet fear what that might cost us; when we seek their approval, yet mistrust it.

In reckoning with her unique heritage, as well as providing new insights into the life of one of our most important poets, Calhoun offers a brave and hopeful meditation on parents and children, artistic ambition, and the complexities of what we leave behind.

“Also A Poet covers turf that is delicate, fought-over, and sacred... Let Ada Calhoun be our guide through all, but hold her hand tight—the journey is wild!”

“Also A Poet covers turf that is delicate, fought-over, and sacred. What poet is NOT one complicated creature? Whose father is NOT a confounding mystery to a daughter? What era of New York was NOT a fevered, fervent time? Let Ada Calhoun be our guide through all, but hold her hand tight—the journey is wild!”

“In Ada Calhoun’s hands, this one-of-a-kind story of a mercurial father, a conflicted daughter, and the artistic idol they both share is marvelously universal — by turns touching and laugh-out-loud funny and endearing and wise. If you are interested in parents or children or New York City or poetry and art — or have ever wondered about the legacies we leave, the lives we touch, without even knowing it — then ALSO A POET offers observations and insights that you'll carry with you for a long time to come.”

“Also A Poet contains multitudes. I’ve never read anything like it. The mind boggles at how much brilliance Ada Calhoun has managed to pack into this slim volume: a celebration of one of America’s greatest poets, an ode to New York of today and yesterday, an investigation into legacy and memory, a meditation on art and writing, a humane yet fiercely candid look at the anxiety of influence, a memoir about her fraught but fruitful relationship with her father, who put his art above all else. What does it take to be a truly great artist? This extraordinary book, full of wisdom, beauty, and generosity of spirit, proves that we can be ‘good’ and also great. Here in your hands is non-fiction at its most marvelous, a book that moved me in ways that the best fiction and poetry does. I’ll sum up my feelings in a word: Exceptional.”

“Through moving feats of narrative magic, Ada Calhoun tells the story of the lives of Frank O’Hara, the New York School poets and painters, her father’s, and her own, and what passes between them in this vulnerable, insightful, and, ultimately, forgiving book. Also a Poet is a marvel!”

“This book is a gift to fans of Frank O'Hara, fans of downtown New York, and fans of queer history. It’s also a gift from one writer to another. The fact that that writer is a daughter paying tribute to her complicated father makes the work all the more resonant and beautiful.”

—Alysia Abbott, author of Fairyland: A Memoir of My Father

"A Vogue Best Book of 2022 So Far. A sweetly personal reckoning with the anxiety of influence... sounds like a pretty heady brew, but Calhoun’s voice is clear and cogent, a winning and personable guide."

"Also a Poet, by Ada Calhoun. Oh, Ada Calhoun. Ada is wonderful and prolific and smart and funny and her new book, Also a Poet, is about her father, and about Frank O’Hara, and being a certain kind of New York City kid who turns into a certain kind of New York City adult. If you love the New York School poets and have ever imagined yourself part of a very cool crowd of painters and poets full of artistic cross-pollination, you will love this book. I love this book. I think that being the child of artists forces you to see your parents as flawed pretty early on, or maybe just as differentiated humans who have desires independent of their lives as parents, and this book is really speaking to me."

[STARRED REVIEW] "Deeply moving and exceptionally well written, this offbeat memoir will please anyone interested in the NYC art scene from the 1950s on. Every father should have a daughter as loving, perceptive and honest as Calhoun."

[STARRED REVIEW] "Mesmerizing work... a prismatic account... a masterpiece entirely her own, tapping into the 'perpetual wonder; that imbued O’Hara with an 'enlightened, saintlike quality' to radiantly explore her knotty relationship with her father, 'the saddest part of my childhood and the greatest gift of my life.' It’s a dazzling thing to behold."

"Nothing goes as planned in Ada Calhoun’s Also a Poet: Frank O’Hara, My Father, and Me(Grove, June), but that’s precisely why it captivates. When things became difficult while she was writing the book, Calhoun stuck to her journalistic instincts and dove deeper. What she landed on was something more distinct and remarkably richer than what she’d originally envisioned..."